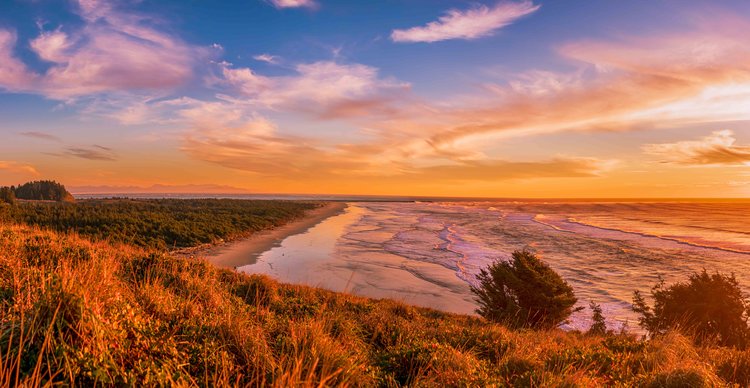 Chinook was originally known as Old Chinookville and was home to over 1,000 Native Americans until the arrival of white colonists which, sadly, decimated the village with disease.

Today the Chinook Indian Nation is alive and well, still practicing the ceremonies and traditions of their ancestors.

In the early 1800s the town became a famous waypoint for Meriwether Lewis and William Clark as the Corps of Discovery marked the most NW point of their journey before wintering over at Fort Clatsop, near Astoria, OR.

As the century wore on, and summer homes were built on the Washington side of the Columbia, Chinook became a wealthy town due to the rich salmon fishery at the mouth of the River. At one point, Chinook boasted being the richest town per capita on the West Coast.  The town remains a fishing village and is the site of a busy port.

The Port of Chinook offers a variety of amenities and services for commercial and sport fishing. The marina accommodates up to 300 vessels, with commercial and recreational moorage annually or transient.  Boat trailer parking and ancillary services are available as well as a boat launch and marine fueling.

Chinook County Park is on the north side of Chinook, quite literally just before going through the tunnel.  It’s a little known secret of locals, with a picnic area just feet from the water.

Construction began on three forts to protect the mouth of the Columbia River in the late nineteenth century.

Now, these coastal defense sites can be explored by visitors.   A great place to hike and stroll, the seasonal interpretive center features artifacts from Chinook Nation history, as well as restored historic barracks, gun emplacements and batteries.  Spectacular views await!

Chinook Nation Middle Village can be found after leaving Chinook heading toward Astoria.  Look on the left after going through the tunnel passing beneath Fort Columbia State Park.  Middle Village was used and called Station Camp by the Corps of Discovery, and Clark used it as a primary survey station as he mapped the mouth of the Columbia River. The Chinook people, who have lived along the Columbia for thousands of years, used this site as a trade village.

Today, visitors can also use the camp – as a roadside rest stop.  Park and explore St Mary’s Church, Chinookan canoes, and a trail with an overlook platform.  Or just enjoy the amazing view of the Columbia River and, seasonally, fishermen.  Just off St Mary’s Church is a great place to watch sturgeon fishing in season!

And then there is Dismal Nitch.  In 1805 Lewis and Clark paddled along the treacherous Columbia River bar to the Chinook village, with Clark ultimately journaling about the most NW point in the journey just west of what is now the Breakers Resort in Long Beach.  A bronze tree commemorates Clark’s carving his initials in a tree at the same location 200 years before the bronze was placed in 2005.

On the way to Middle Village / Station Camp, a terrible storm trapped the Corps of Discovery in a rocky cove off the Columbia River for six stormy days. The Cove is now called Dismal Nitch, which is how the Corps referred to their 6-day forced home.  Leave Middle Village heading inland and you’ll find Dismal Nitch right about where there is a rest stop on the river side of the road.  Park and walk in the footsteps of the Corps of Discovery!

Most of the year, the cove isn’t dismal at all.  In fact, it’s a great place for a picnic with views of the 4-1/2 mile long Astoria-Megler Bridge.  However, if you head to the bookstore at the Cape Disappointment or Fort Clatsop Interpretive Centers, you’ll find a great poster that is top-selling in the series of important historical locations in the area.  Moms apparently love it for teenager bedrooms!